Jefferson is a long, narrow Parish (County) in Louisiana, adjacent to the city of New Orleans, reaching from Lake Pontchartrain on the north, about 55 miles south to Grand Isle, on the shores of the Gulf of Mexico. The northern 14 miles of Jefferson is split by the winding Mississippi River into an East and West Bank and this portion of the Parish is considered urbanized, and part of the New Orleans Metropolitan Area. In addition, the Parish is further bounded by estuarine systems of the Gulf of Mexico, at tide level.

Most of the population of Jefferson (nearly ½ million) is in this urbanized metropolitan area, which has relatively flat topography with ground elevations varying from slightly above to about five (5) feet below sea level. Flood control is provided by a system of levees, floodwalls, canals and drainage pump stations. All storm water runoff is conveyed by gravity through a system of subsurface drainage lines and canals into the suction bays of various pump stations then pumped into surrounding bodies of water outside of the flood protection system.

The Department of Drainage is responsible for the administration, direction, coordination and implementation of major drainage and flood control programs and direct operation, construction and maintenance of: 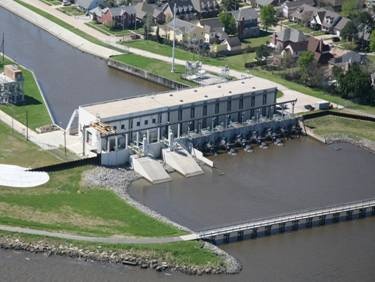 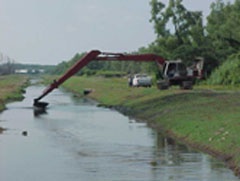 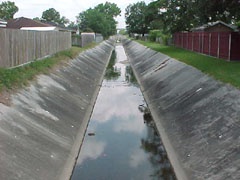 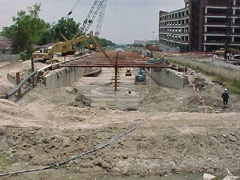 Routine maintenance is handled by the Department. This includes cleaning drainage channels of obstructions in addition to removing blockages from roadside gutters, catch basins, drain inlets, aquatic growth, and weeds in drainage channels. The cities of Kenner, Harahan, Gretna, Westwego and Lafitte maintain the internal street drainage system within their respective municipal limits. The City of Grand Isle is responsible for the operation and maintenance of all its drainage facilities. 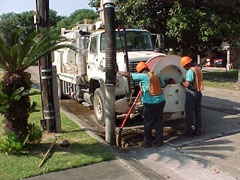 Drain lines are inspected visually and with the aid of video cameras. Broken pipes are rehabilitated in some cases by the process of in-situ lining utilizing polyester fiber material or removed and repaired by conventional methods. 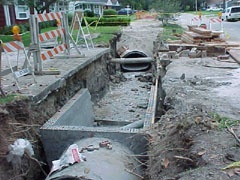 The Department of Drainage is also responsible for the operation, maintenance and capital improvement of 73 drainage pump stations containing 195 pumps installed throughout the Jefferson Parish drainage system. The primary goal of the Department is to provide staffing for operations and maintenance of all pumping equipment and associated machinery. All pumping equipment is driven by either electric motor drives, most of which are equipped with auxiliary power, or diesel engines. Pump station facilities are furnished with a Supervisory Control and Data Acquisition (SCADA) system to provide more efficient response and better control of operation during storm events.

The East Bank has 38 pump stations: 9 front line stations plus 29 internal lift stations containing a total of 98 pumps with a total basin outflow capacity of 23,842 Cubic Feet per Second (CFS). A new 1200 CFS Harahan Pump Station was designed under SELA. With an area of 31,535 acres (2456 acres of which are drained by NOSWB Pump Station No. 6) and a population of approximately 260,000, the stations presently provide an average pumping capacity of 0.75 CFS per acre (0.75 inches of rain per hour) after all SELA projects.

The West Bank, exclusive of Crown Point, Lafitte and Barataria, has 20 pump stations containing a total 71 pumps with a total basin outflow capacity of 26,096 Cubic Feet per Second (CFS).  Serving an area of 48,483 acres with a population of 193,000, the stations presently provide an average pumping capacity of 0.53 CFS per acre (0.53 inches of rain per hour). Crown Point, Lafitte and Barataria are served by a system of multiple ring-levees and 16 remote lift stations containing 28 pumps with a total capacity of 623 CFS.

The design of pumped drainage systems starts with the return expectancy (or frequency) of various rainfall events. The degree of protection cannot be infinite, but must be related to what the public is willing to support and pay for, as very expensive pump stations, large canals with small slopes, etc. are required. Presently, Jefferson Parish designs its major drainage system to provide protection against a 10 year recurrent expectancy.

When referring to the capacity of pumps and pump stations, the term "CFS" is used. CFS stands for "Cubic Feet per Second." CFS is one of a number of ways of measuring volumetric flow, and is simply the time it takes for a measured volume to pass a fixed point. For example, a 1000 CFS pump at a pump station can move 1000 cubic feet of water every second from a canal to the other side of a levee.

In order to better appreciate the capacity of a pump station, it is best to use a measure of volumetric flow that everyone understands. Therefore, another more commonly understood term used to measure volumetric flow is GPM, or Gallons per Minute. In order to compare GPM to CFS, it is essential to know that approximately 7-½ gallons equals 1 cubic foot. Since there are 60 seconds in a minute, 1 CFS equals approximately 7-½ gallons times 60 or almost 450 GPM. This would mean that a 1000 CFS pump moves approximately 450,000 gallons of water every minute! With the entire post SELA & SWFC capacity of Jefferson's pump stations being 47,100 CFS, which translates into over 21 million gallons of water pumped every minute!

The organization of the department is comprised of administrative, operations and maintenance divisions. Some of the major pump stations are furnished with an operator's resident house; other major stations are manned with either two or three eight (8) hour shifts, depending on their locations.

On weekends and holidays, as well as during non-manned periods, pump station operators are placed on stand-by and remain ready to activate the stations at a moment's notice should the need arise. However, if rain is forecast the stations will be manned.

Remote lift stations operate automatically and are inspected daily by the operations division.

Jefferson Parish has designed and constructed Safe Rooms at fourteen (14) of the Drainage pump stations. Pump station operators and screen cleaning personnel will occupy these Safe Rooms during the passage of a hurricane. The Safe Rooms are designed to withstand 250 mph wind load and water surge produced by a Category 5 hurricane. These Safe Rooms are equipped with remote control capabilities to operate all of the pumps at the fourteen (14) pump stations which include the original eight (8) safe rooms with capacity of remote operation of horizontal pumps.

Sluice gates and cutoff valves have been added during the Corps of Engineers Fronting Protection projects to combat any possible backflow from the Lake.

How Can I Obtain Assistance and Report Drainage Problems?

Are the pumps turned on?
At the major pump stations, the operators start the pumps when the water level rises to a set elevation, whereas, at the smaller stations the pumps start automatically. Supervisory Control and Data Acquisition (SCADA) equipment is set to monitor water levels and pump operations. At any given time, the SCADA screen indicates the operational status of all pumps at the stations. Westwego No. 2 in the West Bank and Elmwood Pumping Stations in the East Bank are equipped with a SCADA monitoring system. SCADA operators monitor the rain events and canal water levels at all drainage basins Parishwide around the clock and notify the superintendents on stand-by to take immediate action to resume operation of the pumps in case of any rain event or rising canal water levels.

How much rain has fallen?
Amount and intensity of rainfall is also monitored by the SCADA system. The SCADA screen indicates incremental and total rainfall at any given time.

Why doesn't water appear to be moving in the canals?
As the rate of storm water inflow exceeds outflow in any reach of the canal network, the water rises, occupies more storage and creates the illusion of no flow.

Why aren't the pumps on and running before a rainfall event?
The pumps cannot be turned on unless an adequate depth of water exists at the inlet basin of the pump station otherwise pumps could be damaged.

Why can't we hear the pumps running?
Many of the pumps are electric motor driven and run very quietly. Engine driven pumps are housed inside operating buildings and can only be heard near the stations.

Why is the street flooding & water not draining off the street?
Many existing drain lines especially in the old areas prior to 1981 were not designed to handle a high rate of rainfall in a short time. As a result streets will flood when a high intensity rainstorm of short duration occurs. Many existing drain lines were designed and built to old standards which equates to smaller pipes. Sometimes drains become clogged with leaves and debris, reducing their ability to carry the storm run-off.

When are they going to cut the grass on the canals and ditches?
In Jefferson, there are approximately 700 miles of canals banks and ditches requiring grass cutting. Grass cutting on canal slopes is cut, on an average, six (6) to eight (8) times per year and canal flats are cut up to eighteen (18) times per year, weather permitting.

Why is my sidewalk or driveway sinking?
There can be several reasons for this: